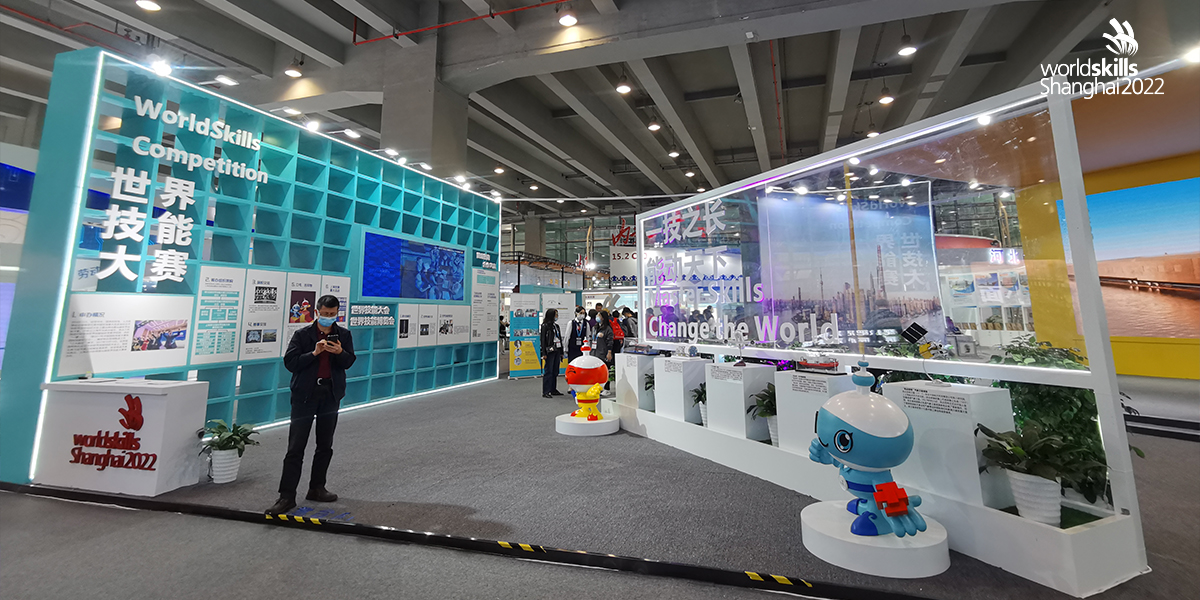 Shanghai is promoting the 46th WorldSkills Competition and the WorldSkills Museum at the ongoing 1st Vocational Skills Competition of China in Guangzhou, Guangdong Province.
At a booth in the exhibition area of the Canton Fair Complex, venue for the national skills competition, mascots, logos, slogans and information of the 46th WorldSkills Competition, which is due to take place in Shanghai in 2022, are on display.
The booth also has a model of the WorldSkills Museum, which is under construction in Shanghai.
“We hope skilled people from all over the country can learn about the international exhibition and seek potential sponsors,” said Shan Bo, planner of the exhibition booth. “Meanwhile, we also hope to solicit exhibits for the museum. Luckily, some people have approached to offer their collections these days.”
At the museum exhibition area, 20 skills experts and intangible heritage inheritors have been invited to tell the stories of their skills and record them as oral history.
Shanghai skills on display
Shanghai is also showing the skills development in the city at the booth, such as the integration of online and offline training for skilled talent, the increase in highly skilled staff from 6 percent of all city skilled workers in 2002 to 34 percent last year, as well as programs to engage skills masters in spreading their expertise.
A training system featuring mixed reality (MR) technology attracted visitors to try their hand at repairing a vehicle’s engine.
“VR and AR technologies are popular now but MR is new in China,” said Shan. “We brought this exhibit to show the latest technology in skills training in manufacturing in Shanghai.”
Barista qualifications
Several baristas are showing off their skills in making coffee at a mini bar at the booth. The coffee, with beans from Yunnan Province which is paired with Shanghai in poverty relief, attracted a lot of visitors.
“The coffee industry is booming in China these years and Shanghai is taking a leading role with its consumption volume, coffee culture and service skills, with an increasing demand for professional baristas,” Zhou Fang, secretary general of the Shanghai Technician Association’s Coffee Professional Committee.
Zhou said Shanghai is leading the drafting of national standards for barista qualifications.
“We’ve invited experts from all over the country for the draft and it is expected to be released next year. After that, we will also develop textbooks and other teaching materials for barista training. We hope the standards will help improve the service level in the barista industry in China.”
Zhou said the experts have proposed the inclusion of five levels for barista qualifications, ranging from primary barista to senior technician.
“A primary barista should master basic skills for service at a coffee shop, while a senior technician should know how to serve coffee, select and roast coffee beans, and also how to run a coffee shop and make it profitable.”
Zhou said currently many coffee shops train baristas themselves and lacked unified standards. In the future, baristas will be able to get certificates as long as they pass qualification tests as in other vocations. Also, with these standards, we hope baristas can be a competition category in next national vocational skills competition.”
At the mini bar were two students from the Shanghai Trade School.
One was Chen Jiangping, a student from Yunnan Province.
“Though Yunnan is a source for coffee beans, I began to learn coffee culture and making skills after I entered the school in September,” she said. “A senior student from my school – Lu Xiaofei – was champion at the third Shanghai Coffee Masters Cup last week. She is my idol now and I would like to be an outstanding barista like her in the future and promote Yunnan coffee after graduation.”